The sheep of this breed are the lineal descendants of the Dishley Leicesters. They were introduced to Northumberland in 1767 by Matthew and George Culley, who were pupils of Bakewell, the English geneticist and were soon established in the north of England and southern Scotland.

The breed arrived in New Zealand in 1859, and after refrigeration was introduced in the 1880s, the Border Leicester was used as a crossing sire to produce heavyweight lambs and wether mutton.

The Border Leicester contributes high fertility and good mothering qualities to its crossbred progeny and is being used to increase fertility in the commercial Romney, Corriedale and Merino flocks. The Border Leicester has been used to develop New Zealand’s Border-Romney cross (Coopworth) and the Border-Corriedale (Borderdale).

The wool is long and lustrous with individual staples easily separated and ending in a small curl. It is used for upholstery, and hand-knotted and machine-made carpet yarns. 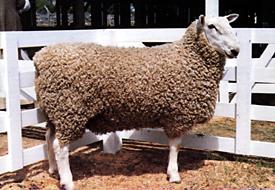 The Border Leicester is the pre-eminent crossing sire with proven performance and unsurpassed ability to increase production and profits in commercial ewe flocks. 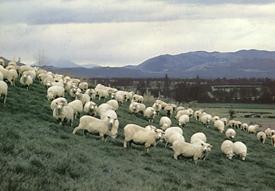 The efficiency and profitability of prime lamb production is mainly dependant on the fertility, the lambing performance, the milking and mothering ability of the prime lamb dam.

Historically the Border Leicester has made a supreme contribution to the sheep industry and economy of New Zealand as:

THE BORDER CROSS EWE IS UNSURPASSED AND HAS IT ALL

Large, long-legged, with a pronounced Roman nose. A comparatively prolific breeder. A dual-purpose breed. Principally used for cross-breeding to improve the fertility and performance of other breeds.

Location: Stud flocks are found throughout New Zealand with the majority being found in the South Island.