The South Suffolk first appeared in New Zealand during the 1930s in response to an overseas demand for leaner meat.

It is a New Zealand breed developed in Canterbury by a Southdown stud breeder, Mr George Gould, who was also responsible for the introduction of Suffolks to the country. Gould wanted a specialist breed to meet the requirements of a price schedule for prime lamb cuts which carried penalties for too much fat. The quick maturity and carcase shape of the Southdown and high flesh-to-fat ratio of the Suffolk were incorporated.

The South Suffolk became a registered breed in 1955 and is increasingly being used as a terminal sire for prime lamb production. Its high yielding carcase makes it ideal for further processing. The Down wool is used for fine apparels and hand knitting yarns.

By using South Suffolk rams you can … 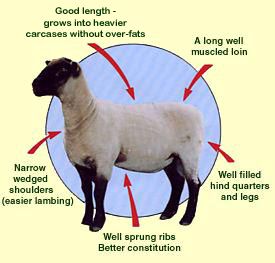 Location: On all types of country throughout NZ in stud and commercial flocks.